The big project in 2017 was trying to establish a library in Zambia, using 26 and a half tons of donated books, packed in a 40 foot long steel shipping container. It had taken me almost three years to get this thing in place. It took a lot of help from a lot of people to make this project work but eventually we sent a steel shipping container with 26 and a half tons of books to Zambia in July. 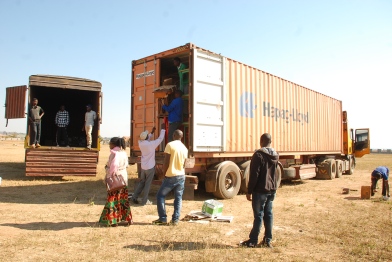 The idea for this library came from a challenge of Catherine Daka, the headmistress of Graceland School, with whom I have been working for several years, to do something to bring “literacy” to Zambia. Together, we came up with the idea of the “Sister Grace Library”. (Graceland school was named after a nun, Sister Grace, who died very young in Zambia.) The aim was to found one enormous central library of books which can be located in numerous different deprived schools in Zambia, but which will be centrally administered. Most schools in Zambia have no books and Ndola, Zambia’s second biggest city, had no library and no book shops. It was the vision of Catherine Daka to make Zambia a literate society, and the first step is the provision of books. That is where we came in.

bookshelves and Books in Graceland School

All of the books and the bookshelves were donated free of charge by libraries and schools around Ireland and by the educational publishers in Ireland, as well as by individual supporters who cleared out their children’s bedrooms of unwanted books. The books were transported to the container in vans which were lent to me free of charge, and the container itself was bought outright and donated by a kind supporter, so that we can leave it permanently in the village of Chipulukusu as the structure of a local community library. Even the warehouse in which the books were stored and sorted was given to us rent-free.

When it came to the cost of transporting the shipping container from Dublin to Zambia, again kind and generous people donated the cost, simply because they believe in this project. The final intervention was that the Irish Government, through the intervention of the Irish ambassador to Lusaka, Seamus O’Grady, donated a substantial sum to the cost of transport of the container and formally took on the formality of the import of the container into Zambia as an Irish Government officially sponsored project.

The container arrived in Chipulukusu in the middle of July 2017, and I went out myself with a team of volunteers at the end of July. Apart from our usual work with Habitat for Humanity Zambia, we put in some considerable time in helping to set up the library. In this regard, it is important to acknowledge that Catherine Daka and Bornwell Daka of Graceland School are the custodians and guardians of the library, and it is to them that the resource has been entrusted. They and their staff did an enormous amount of work in unpacking and sorting the books which we had sent over. In our Irish team however, we had two Irish school teachers, Mairead Maguire and Emma Palmer, who brought their skill, training and knowledge to the project and were invaluable in further sorting out the books and instructing the local teachers in their use. Over the course of a few weeks, an enormous amount of books were sorted.

On Friday 11th August 2017, we had our big day. The Irish ambassador to Zambia, Seamus O’Grady, came to Ndola to officiate at the opening of the library. We had a formal signing ceremony with Bornwell Daka and Catherine Daka at Graceland School, where in the presence of a larger crowd of teachers and children and assembled dignitaries, the foundation documents were executed, following which, the ambassador, Mr O’Grady, cut the ribbon – and the library was opened.

Later the same day, we all attended at Youngnak Christian School in Chipulukusu which was nominated as the very first school, outside of Graceland, to share in the library. At a simple ceremony, Mrs Daka handed over to Rev Peter Kim, founder of Youngnak Christian School a large number of books and the library cards to start the first new branch of this library. The co-operation between these two great schools makes both of them stronger.

Seamus O’Grady, Irish ambassador to Zambia, proudly shows his library card to Jedoh, Chairman of Chipulukusu and Catherine Daka of Graceland School, and director of the Sister Grace Library

Finally, Seamus O’Grady, the Irish ambassador, again officiated at the formal opening of the community library in Chipulukusu, which is now located in the shipping container itself. Representing the Irish people and all who contributed to this great endeavour, Mr O’Grady formally opened the creaking steel doors of the container and presented the key to Jedo Chibale, the Habitat community Chairman. Again, Catherine Daka then presented to Jedo and the community a large stock of books, and the library cards to run the library. Chipulukusu now has its own community library.

This, then, is just the opening chapter of a great adventure. Books now are beginning to flow around the schools and the communities of Chipulukusu and Ndola. As of December 2017, we have branch libraries open in 12 schools. We are gathering a pace.

In addition to the big library project, one of our team this year set up a computer lab in Youngnak Christian School, and he also refurbished and improved the computer lab in Graceland School, using 18 laptop computers which had been kindly donated for that purpose. When that was done, he held several workshops in computer skills for teachers in many of the local schools, so that the teachers themselves will have the skills to pass on to their pupils.

At the core of our activities, we also built this year another three houses with Habitat for Humanity. The families involved were again the poorest of the poor, and for whom Habitat for Humanity was their only chance of decent housing. The team managed to house three families who lived in shacks when we arrived, but who had solid concrete-block houses when we left. Tragedy however, was never far away and even before we had finished the house for the third family, that of Grace Mutale, she died. Even among the loss of their mother, the children of Grace Mutale gave thanks that they now had a safe and decent place to live. 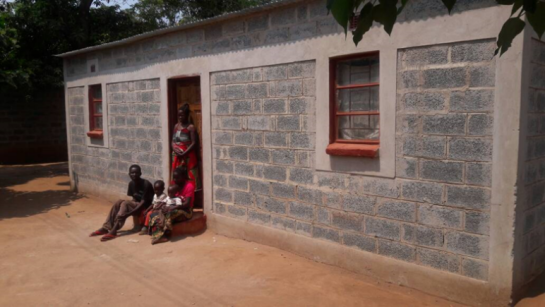 Sharon Chileshe at her shop, start up funded by ZDSF

In addition to all of this, our micro finance project is growing strongly now again. We started a few years ago, with a small amount of capital donated by generous donors, to make small loans to people who have good business ideas, but who are too poor to be considered for a loan by a normal bank. The initial experiment was a huge success, but we lacked the organisation to keep it going and to expand. With new people appointed to take on the administration when I was over in Zambia in August, we have issued another 20 loans to ladies in Chipulukusu who wish to establish or to expand a small business. The interest in this finance is huge, and the effects are immediate. With access to small amounts of capital, the very poorest people can very quickly establish a business and lift themselves out of poverty. With chicken rearing, small shops, food stalls and tailoring, the enterprise culture is beginning to take hold. We have now partnered with Pastor Francis Feruka, to distribute loans to members of his congregation, and extended also out to the community of George compound, where there is still great need of financial help. The repayment rate is still excellent, so according as the loans are re-paid, we can still lend to more.

On top of all of that, there were some people during the year who offered to help with some very specific projects, and chief among these was the two donors who decided to help Niba Uwafye school. This school, which caters for the very lowest, poorest and most lost of all children in Chipulukusu (mostly orphans) was housed in a very low and shaky, poorly constructed building, with no windows or doors, only a mud floor and a leaking roof. With no books, electricity or teaching materials, it was at the beginning of the year one of the most pitiful attempts at education, but also one of the most optimistic. One donor from Cork gave the proceeds of her retirement celebration in brand new books, for Niba Uwafye School. One schoolgirl in transition year mobilised her class to raise funds to fix the school buildings and one kind friend was inspired by both to hold a fundraiser event just for that purpose. Together, they raised several thousand euro. When I was over in Zambia in August, I was able to arrange for the appointment of builders and overseers and the administration of the project. After I came home, the work started and we raised the walls, replaced the roof and inserted windows and doors.

All of the above, and so much more, is going on in Zambia, and with friends and supporters all over Ireland. There is a huge amount to do, but so many ways to help. As I write this letter, I have a second 40 foot long steel shipping container in Glasnevin which is again almost full with books. I do not yet know how I am going to get it out to Zambia, and I again need sponsorship, advice and assistance, but the last one worked and I have no doubt but that this one will work out too.

The direction of my work in Zambia has moved from the initial focus on providing shelter and housing, and then to clean water supplies, through to helping schools with books and supplies, micro-finance, teacher education programmes, computer labs, libraries and now even construction of school buildings themselves. As each year comes, I find myself involved in more interesting and adventurous things, and every year is more interesting than the previous year.

In the coming year, I hope to be continuing on with all of the above works and programmes. After ten very productive years with Habitat for Humanity, I will be teaming up with another charity to allow for the more varied nature of the widespread community development in which we are involved, and to tap into the more varied talents of our volunteers. Whereas in the past, the Habitat for Humanity construction of homes was always at the core of what we did in Zambia, I am hoping to recruit and to make good use in the coming years of wider and greater talents than that. So while we will definitely be building again in the summer of 2018, I am also specifically looking now for educators who can teach teachers, educational psychologists, librarians, computer experts, and anyone who thinks that they might be able to travel with me to Zambia in 2018 to contribute to our projects. If you think you can help in any way, let me know

Many thanks for your support.