In August 2012 I went back to Zambia again with another small team of volunteers, to work on the Habitat for Humanity Global Village Programme with the Orphans and Vulnerable Children of Zambia. I would like to let you know how we got on.

There was a last minute change in plan in that we could not go back to Kawama where we have been working for the past four years due to political unrest and fears for our safety. Instead, we were sent to Chipulukusu about eight miles further east. This was a bit of a change in location, but essentially we were working with much the same team of Habitat volunteers, builders and organisers on the ground.

Chipulukusu is a vast unplanned sprawl of 68,000 people, without proper roads, sewage or water supply and which is notorious for a history of violence and murder. The good news is that over the past ten years a very powerful evangelical Christian mission has been effective in changing it into a relatively peaceful place.

Although the fearsome reputation remains, the town we entered in August was little different to many other places in Zambia. The depth of poverty and illness is predictably appalling but the people are as kind and welcoming as everywhere else and the overall atmosphere is peaceful. We met many lay pastors, preachers and ministers on the streets of Chipulukusu but there was no sign of guns, violence or crime to match the reputation.

For two weeks, we lived in the local houses and shared the lives of the local people as in previous years and primarily we worked by day on providing houses and latrines for two specific families. As ever, while we could only physically work on two houses while in Zambia, we provided enough money (donated by you and other friends in Ireland) to build many more in the months ahead while we are safely back in Ireland.

As is common, the families for whom we were providing houses this year were in the very abyss of deprivation. I would like to tell you about one of them. 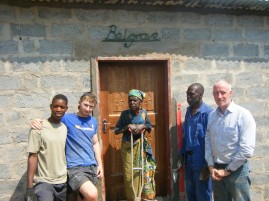 Lister outside her new house. Also pictured, Checka, Steve, Julius and Me (Click on photo for larger image)

Lister Kamwendo, is a 74 year old widow. She had five children, but all of them have died. She also had an indeterminate number of grandchildren but most of them have also died. She has two grandchildren left, being Lovemore (16) and Joyce (15), and she is their sole guardian. The three of them live together in the one remaining room of a collapsed mud house where they huddle together on the floor for warmth, not even having a blanket between the three of them.

Lister is ill and crippled and can only barely stand with the aid of a crutch. She has no income and the two children do not go to school. They survive by begging and the kindness of neighbours, but they are begging in the poorest of the poor places on planet earth.

Although I cannot think what more could possibly be done to humble or deprive a human being, I can only tell you that every day Lister, Joyce and Lovemore were cheerful and smiling and I never heard a word of complaint or self-pity from any of them. Lovemore and Joyce quietly helped us with the building work while Lister looked on patiently, making the odd comment or giving directions. Their dignity was an inspiration.

Over the course of the two weeks, we managed to get a small concrete block walled and corrugated-iron roofed house built for Lister and her two grandchildren. They now have three small rooms to call home. We also gave them some clothing and bedding which we brought over from Ireland.

Lovemore, an orphan at 16, is Lister’s grandson.

Habitat for Humanity Zambia has partnered with the local Samaritan Strategy organisation to provide more family support in terms of food, and they are even discussing the possibility that Lovemore and Joyce might get to attend school. Given the state of Lister’s health, they are also making arrangements to ensure that the house will transfer to Joyce after Lister’s death.

Quite aside from the day work of building specific houses, we also developed further our plans of the past few years. Due to the continuous support of friends in Ireland, our contacts are growing and so too is our reputation and our impact in Zambia. 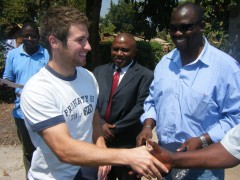 Gavin meeting the deputy mayor of Ndola, local member of parliament and CEO of Habitat Zambia, 2012

Perhaps the best indication of our growing credibility is that the local TD for Chipulukusu has now promised me 60 house plots in Chipulukusu for Habitat for Humanity Zambia. I have no doubt that there is a to be done to bring these 60 plots to reality, but our local Habitat representatives on the ground are working to ensure that it comes to fruition. Once we get the plots, the next challenge will be to raise the money and the manpower to build 60 houses – but that is for next year.

We also grew our connection with other organisations in Zambia including the Graceland school near Ndola. Although the school was founded only eight years ago and is very poorly resourced, it has almost 400 pupils. Until a year ago the school had no books (literally no books) and so we brought out a large suitcase of books to the school which will form the seed of a new school library. We are currently exploring how we might be able to help this school in a more consistent way over the coming years.

While in Zambia, we also had the opportunity to catch up on many old friends in Lusaka and in Kawama (which I found to be as welcoming and friendly as ever and no sign of “political unrest”). Nearly everyone who has been provided with a Habitat house in the past is now in good health and going from strength to strength. The improvement in physical appearance, healthier and economic strength was notable.

Old friends in Kawama, 2012. Including Ben, Gavin, Mr Levy, Clara, me and Innocent

On a personal note, I found that Innocent Mutele has eventually achieved his ambition of being re-united with his sister and he is back at secondary school where he is trying to finish out the two years which he missed after the tragedies of his parents and then his aunt’s death. He is healthy and strong as an Ox. Clara, who was quite ill last year, has recovered her health and looks well.

Beauty’s entire family have been re-united in her Habitat house, which continues to be the party house of Kawama.

All in all, this year’s visit to Zambia built on the foundation of our previous years’ work and with growing contacts and credibility on the ground, it looks like it can only get better from here. There is still obviously a lot more to do, but at this stage I can only thank you again for your support, which has again changed people’s lives in ways that you can only try to imagine.

If you think that next summer might be your year to come out to Zambia with me, let me know.