In September 2009 I went back to Zambia, to work with Habitat for Humanity in helping those who are in need of basic housing and particularly those who are afflicted with the Aids virus. I would like to tell you what we did.

Firstly, the plan was to raise money in Ireland for those in Africa who need it. With your help we raised over €47,000.00. That sort of money can make a serious impact in a place like Zambia. I can only thank you and all of our supporters for helping to raise that much.

The plan initially was to work again in Tiyende Pamodzi outside Lusaka, where I was last year, but 2 weeks before we left, we were notified of a late change and we ended up about 220 miles north of Lusaka in a place called Kawama, just 2 kilometres from the Congo border. In this remote place we found a similar situation to last year in Tiyende Pamodzi, except that this time we were in a rural area rather than an urban slum. 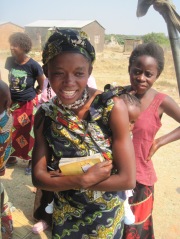 As with last year, the people with whom we were working were invariably widows and orphans, mostly victims of the Aids virus and most of whom are presumed to have the virus themselves. Tuberculosis and the yellow eyes of Malaria were everywhere. Official figures tell me that the average life expectancy in Zambia is 38 but in these areas life expectancy is a good deal less than that. One lady told me that they count on burying five family members a year. It was again noticeable how very few men and teenagers there were in the village. The people were poor and deprived of all material goods and the poverty was at times brutal to our eyes. However, as I write this report, it is not the poverty or the deprivation which is at the forefront of my memory. What I primarily recall is the warmth and the good humour of these people and the way in which they quietly accept all that life may bring. That, more than anything, is the message which I have brought back: Desperate as the bare facts may suggest life to be in Kawama, there is much reason to be hopeful and optimistic, and to be thankful.

Kawama is perhaps on the edge of civilisation but at least there is the possibility in such a remote setting that one can scavenge some resources. One lady for whom Habitat were building a small 3 room house told me how you can get by. She seemed to me to be in her late 40s, which is quite old for a lady in Zambia. She was sitting in front of her house surrounded by small children and appeared to be quite exhausted and perhaps ill in the middle of the afternoon. Her house was built of clay and was clearly falling down. I asked the lady to tell me of her situation and this is what she told me;

A widow with 8 orphans

The lady told me that she was looking after 8 grandchildren between the ages of 2 and 12, all of whom were the children of three sons of hers who had all died, and whose wives had also died. She was also looking after 2 of her own children, one of whom, a son in his 20s, was profoundly mentally retarded. Her own husband was dead. Upon enquiry as to how she fed and kept her family, she told me that she goes every day into the bush and tries to find roots, herbs, leaves or any sort of plant that she can collect and then she sells them on the streets. She told me that it is difficult to sell these things in the streets, but that is how she survives. 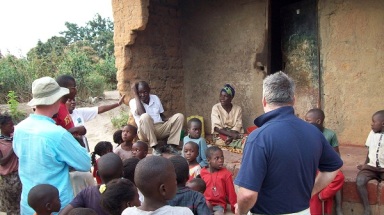 A widow with two children and 8 grandchildren to look after

Habitat for Humanity is now working with this lady to sustain a viable family unit for her orphaned grandchildren where their most basic needs will be met. They start with a house and then she will be given basic supplies of medicine, food and education for all of those she is looking after, and for herself. Your money is making this possible. Without your money God knows what would have become of this lady, her 8 grandchildren and 2 children.

Family units in Zambia do not last. One of the houses which we built while in Kawama was for an earnest 16 year old handsome boy called Innocent Mutele. He reminds me a lot of my own son, Oscar. I think of him a lot.

Innocent’s father died in 2005 and his mother died in 2007. He was being looked after by his mother’s sister, Mary, who is 38 and has five children of her own. Unfortunately Mary’s husband died in 2003 and she herself was in poor health. Innocent told me that he loves Mary as his own mother and he prays to God that He may spare Mary for another short while. 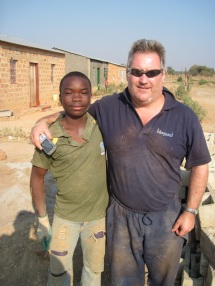 In this case, Habitat arranged to build a house for Innocent and his grandmother is going to move in to the house with him. He will look after his grandmother and she will provide guidance for him. The next door neighbour, Clara, has also agreed to help out. Innocent also told me that he is going to try to save his sister from a village some long distance away, but I did not ask from what his sister is to be saved.

Although nothing was said, I always suspected that if Mary does not survive it may be that Innocent and his grandmother can provide a home for Mary’s five children. In this way Habitat can help to form or sustain a family unit in the face of what misfortune may come. Once a family unit can be sustained, everything else can follow.

I regret to say that I received an e-mail from Zambia since coming home to tell me that Mary died and was buried on 23rd October 2009.

There were 6 of us volunteers on this trip, and we lived in a house in Kawama, the same as everyone else. We had no electricity or running water or toilet facilities or shower, but we got by. We made use of the pit latrine at the end of a neighbour’s garden and washed in a pool beside a broken water pipe at the edge of the village. We had the advantage of sleeping bags and mosquito nets and we had inoculations and vaccinations against many of the diseases which devastate our neighbours, and we had the luxury of some local ladies who dedicated themselves to lighting a fire and cooking for us every day. Life was not bad for us at all. 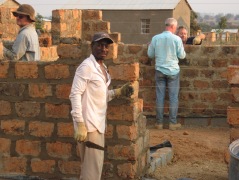 We worked every day from sunrise until about5.00pm, bearing in mind that it gets dark shortly after6.00pm. The work consisted of labouring on site and was exhausting but it was here that we met our families and neighbours. We worked with local builders and family members and even people from across the road who were just willing to work for a day on the building site for no other reason than they wanted to lend a hand to a neighbour. As we worked with these people, I could see how Innocent got to meet and know his new neighbours and they got to know him. Before we had even built the house, I could see the formation of friendship and community and support. Even as other things may have deteriorated in Innocent’s life, he and the community were building for new friendships and for the future.

When in need of a break from the work and the sun, I used to sit down in the shade and talk with whomever was there. From these people I learnt a few words of Bemba (one of 73 different languages spoken in Zambia) and have enough now to at least try to chat up girls and annoy small children. They spoke of school and jobs, of church, of family, of friends and hope and asked a lot about us and about Ireland. Many had never heard of Ireland and for one lady I at least managed to clarify that we do not live in perpetual darkness, but that the sun does still shine in Ireland, even if I do have white skin. 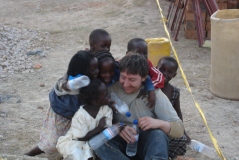 Day and night, we were surrounded by children who laughed and cheered and played and joked and shouted “jimniako” (lift me up!) or “walipena” (you are crazy). Although nearly all must have been orphans, they were well cared for. No one had shoes and everyone was dressed in threadbare clothes but everyone was happy. Everyone had a home to go to. No one lamented what was past and all seemed to enjoy every day for whatever fun it brought.

And despite all of the genuine warmth of the place I still could not help being shocked by some things. When I told one small boy that I had a sister called Mary, he replied that he too had a sister called Mary, and then he did an imitation of choking and coughing with wide bulging eyes to show me how he watched his baby sister die. He then asked the names of any other brothers or sisters I had. My mind was trying to catch up. 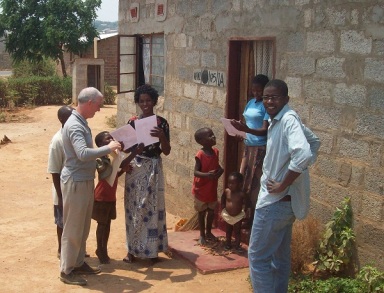 At the end of the trip, I went back to Tiyene Pamodzi to meet again the people for whom we built houses last year. It was hugely encouraging. I met again Iris, the widow who last year lived under plastic bags and cement sacks while trying to raise a family. She is now living in the house which we built last year and the signs of comparative comfort are a joy. She has a bed to sleep in and she has a transistor radio. Her stall, which last year only had three or four tomatoes for sale, is now stocked with a range of perhaps 20 different products from vegetables to washing powder. Iris told me of her children and she showed me around the house. She was proud. The transformation in her life over the space of a year is dramatic and uplifting. 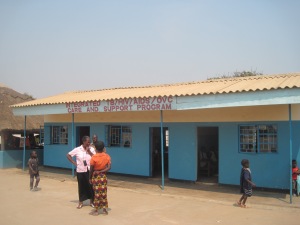 I also visited again the Bwafwano orphanage in Chazanga, which I told you last year had 11,484 orphans under its care. In perhaps the single moment which stunned me most of all, I was told that now they look after 16,496 orphans. There is a lot of work still to do.

In the time that we were in Zambia, we physically built two houses, but we also left behind enough money to pay for the building of another ten. Some of the money donated by you has been earmarked for a water pump in Kawama and some is going to be used for improving sanitation in Tiyende Pamodzi. Behind these houses and pumps, there are countless smiling, grateful people whose lives will be immeasurably improved. This money will do extraordinary things.

And so I have returned again from a distant pocket of our world where poverty and illness and death are turned on their head so that daily life is lived to the full. It is a place where the stark facts co-exist with a handsome and good humoured people who live and work for today and for the future and appear not to lament the past or those things which they do not have. Although they may be God’s most unfortunate people, they also appear to me to be His most happy people. 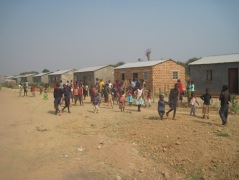 From the bottom of my heart, and on behalf of Innocent, Mary and countless others, I can only say thank you for your support and for making a difference. This has been a fantastic and worthwhile venture.

Habitat for Humanity can be found at http://www.habitatireland.ie/